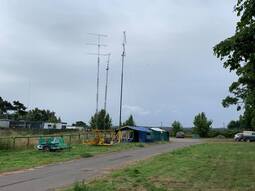 
For those who are unaware, National Field Day is a 24-hour contest where radio stations are established no earlier than 24 hours before the start of the contest & are run entirely separate from established infrastructure. So, no mains electricity or permanent shelters, its batteries, generators, tents & caravans! The events run from 1400UTC on the Saturday for 24 hours. In our region they always run on the first full weekends of June, July & September each year for HF CW, VHF & HF SSB respectively.


The ICG, Invicta Contest Group, had big plans for the 2019 VHF NFD, putting on stations for 2m, 70cm, 23cm as well as 6m/4m which runs for shorter sessions one on each day. A full house.


Sadly 4m fell early due to lack of time to get the kit checked & prepped. 6m was cancelled on Saturday morning due to the main operator & provider of the radio kit having a family illness to contend with. 23cms was a victim of….! more of that later. So we had two stations!


Friday afternoon was spent dragging kit out of storage & placing it in position. Two trailer tents provided both the operating shelters for the 2m & 70cm stations & sleeping accommodation for the operators along with catering. 6m would have been in a motorhome & 23cms in a caravan. Two 60’ trailer towers for 2m, another 60’ tower for 70cms, 7m tower for 23cm & a 12m Scam for 6m along with a 20kv diesel powered towed generator to power the lot. As well as antennas, feeders, control cables, power cables…..


As it started to get dark on Friday night the gas-powered BBQ was powered up & ‘a stranger to cooking sausages’ was tasked to be duty chef. For a novice, M0LMK, turned out some quite acceptably well cooked, burgers, sausages, steak & corn on the cob.


Saturday morning got the work started afresh with the antenna building & station building going in full flow. 2m was the priority. The first technical failure of the weekend, the amplifier was found to be dead. Investigations revealed the power transformer had failed, non-repairable on site! So out came the solid state 300w backup, no legal limit this year on 2m. But the triple stack of 9ele LFA’s went up sweetly on one mast & the pair of 4ele LFA’s went up on the other. We still had plenty of gain, that was when a rotator controller was repaired, it was suffering from the perennial Yaesu split cog problem. Easily solved by Ian, 2E0IJH.


The 70cm station was then built, with the radio gear all installing fairly problem free. The antennas were installed on the recently refurbished trailer tower. The mast was cranked up for the first time, it went vertical, first section started to lift, then a big bang! The tower quickly was horizontal again. The collapse caused a rotator clamp to shatter & the beams hit the ground, joiners in the booms were both bent. Investigation of the mast found a pulley was bent over & the winch cable jammed on the fitting instead of the pulley. One mast now unserviceable, the beams, luckily, quickly repairable & a replacement spare rotator clamp obtained from stores. But most importantly, all operators had been standing in safe space during the luffing & raising, meaning no one was endangered by the failure. But, no spare mast for the 70cms station, or was there? An assessment of the time left to contest start meant that there was insufficient time left to both build the 23cms station & recover 70cms. 70cm got the nod. The SCAM 12 originally intended for 6m/4m was redeployed to 70cm.


So, at 1400UTC Saturday we had two fully operational stations built, but truth be told we only had four adult operators available to run the stations along with two youngsters, admittedly one who is licenced, the other a Foundation student.


So how did the contest go? Well, quite well thank you!
On 2m for the first time we had a panadapter set up, so could see the band in action. At contest start, we could see wall to wall signals with very few gaps so decided to ‘search & pounce’. We started low & worked high, picking of each station as we found them, giving us a reasonable contact rate. After a few sweeps up & down the band then, finding the contact rate dropping, we found a gap showing in the panadaptor display, confirmed the gap with a few swings of the beam, finding no traffic we then started calling CQ. We maintained a steady rate of contacts through to the late evening before traffic really started to tail off. On reaching midnight, with both operators starting to struggle, it was agreed we would cease operations for a few hours well-earned rest. We already had over a hundred contacts logged by then. The 70cm station had also come to a similar conclusion & were turning in.


At 4.30 am for some reason I was awake, despite how tired I’d felt at midnight. So after getting up out of a comfy sleeping bag, putting the kettle on, walking Maddie (honorary canine operator), enjoying the first brew of the day with a blueberry muffin, I was set for a 5am start back at the band, surprisingly a slow but steady trickle of answers came to the CQ call. The rate of responses increased as the morning wore on, with plenty of both UK calls & Europeans. Regularly I found myself flicking from the long nines pointing east after working a German station to answer a Welsh station on the pair of fours pointing north west. Our best DX was 688km to a German station with a fair few 500km contacts also in the log.


Sunday morning is always interesting during these contests as you get the regular 24 hour contesters, those doing a short session, later the ‘Backpackers’ whose contest overlaps the main contest, the ‘rag chewers’ who turn on to chat to their mate or join a regular net which they always do on a Sunday morning to suddenly find it full of contesters, as well as those who ‘just turn on to check activity’ who then stay on to give away a few points. Contests are also fun in that you bump into old friends you haven’t spoken to in years or callsigns you recognise from RADCOM, FaceBook pages or other forums.


All in all it was a good weekend on 2m, 228 claimed scoring contacts. Also contacts were made all around the compass finding stations in Scotland, Northern Ireland, Eire, Jersey & the claimed one contesting station on the Isle of Man of course most of near Europe was worked as well. 70cm was less busy with 54 contacts made in all directions. But looking at the early claimed scores that may be indicative of activity overall on that band. The benefit of a quieter band is that it allows the novice operator a little more freedom to learn & to on occasion stretch out into the more familiar ‘ragchew’ contacts, softening the cut n thrust of the pile up operation which can occur at busy times on 2m. An ideal intro to contesting for a youngster.


Weather for the weekend was reasonably good with a dry sunny set up & take down, increasing cloud cover on Saturday, leading to light rain as dusk approached which increased noise on the band & definitely reduced the stations being heard. Cloudy conditions persisted until contest end when the sun again started to emerge. Europe seemed to be quiet for periods of time which may have been due to the cold front travelling east over them impairing conditions


The highlight for me this weekend was to see the enjoyment on the face of a new operator participating in her first contest as well as the fun being had by a couple of youngsters participating in the contest when & how as ‘they’ wished, being free to go off & find enjoyment doing other things.


I look forward to seeing the final results of the contest, I think we may have improved our league table position over previous years. We certainly have made more contacts! But already we are winners, as we had fun, enjoyed ourselves, improved our capabilities & learnt from the process. Do come & join us & share the fun.


With especial thanks to those who appeared in my peripheral vision delivering, bacon rolls, beef burger baps, sausage sandwiches & cups of tea at what seemed to be well timed intervals. My apologies for not sharing in the cooking, but with headset on I do seem to get rather focussed (well that’s my excuse)! 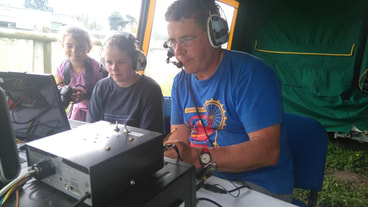